Is bleeding in early pregnancy normal?

Bleeding in early pregnancy is quite common. According to a large study in 2009, almost 30% of women have light spotting or bleeding in the first trimester. This can be a very normal part of early pregnancy and not all vaginal bleeding necessarily indicates a potential miscarriage. Bleeding sometimes coincides with the expected timing of a period. This bleeding is usually light.

What can cause bleeding in pregnancy?

Implantation Bleeding: This can occur when the fertilised egg is implanting itself in the lining of your uterus. As it attaches to the lining to get oxygen and nutrition, light spotting or bleeding may occur. This usually happens about 6 to 12 days after you’ve conceived. Implantation bleeding is mostly light in colour and lasts from a few hours to a couple of days.

Cervical Polyps: These are usually benign growths on the cervix that can get inflamed or irritated and lead to bright red bleeding.

Intercourse or a physical exam:Pregnancy hormones can make your cervix more sensitive than normal. It is easily irritated and can cause bleeding when poked during a physical exam or intercourse. This is nothing to worry about. It usually happens once and stops on its own.

Subchorionic hemorrhage: This is bleeding that happens when the placenta slightly detached from the wall of the uterus. They are usually small but occasionally they are larger. Often women with a subchorionic hemorraghe go on to have healthy pregnancies but a large one may increase the risk of a miscarriage.

Miscarriage: Up to 20% of all pregnancies are miscarried. The cause is not always known, chromosomal or genetic abnormalities in the embryo, hormonal deficiencies, immune reactions or infections are thought to be responsible in the majority of early miscarriages.

A threatened miscarriage is one where there might be some bleeding and cramping but the cervix is still closed and there is evidence that the foetus is viable.

Ectopic Pregnancy: In the case of an ectopic pregnancy, implantation has occurred outside the uterus, usually in the fallopian tube. Long term an ectopic pregnancy is not viable and can become a medical emergency if the embryo ruptures. If bleeding is accompanied by colicky/cramping abdominal pain, it should be considered suspicious and medical treatment is required.

Molar Pregnancy: A molar pregnancy happens when the placental tissue grows abnormally due to a genetic error during fertilisation. The pregnancy is not viable at the fertilised egg cannot develop. An ultrasound is needed to confirm the molar pregnancy and a surgical D&C will be performed.

When to seek medical care for bleeding in pregnancy.

Even though bleeding in early pregnancy is quite a common occurrence, all vaginal bleeding during pregnancy needs to be regarded as suspicious until deemed otherwise by a doctor or midwife.

Get urgent medical attention if you have any of the following symptoms:

How does Chinese medicine view bleeding in early pregnancy?

Chinese medicine looks at patterns of disharmony in the vessels that are responsible for gathering the blood and nourishing the foetus. These vessels are called the Conception and Penetrating vessels. There is also a close relationship between those vessels and the Kidney energy. When there is a disharmony in either of those vessels bleeding can easily occur.

What can you do when you experience bleeding? 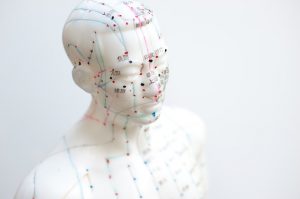 The most important consideration is to determine if the foetus is viable with ultrasound scanning and Doppler devices. If this is the case and you have sought medical advice, there are several ways you support yourself.

From a traditional Chinese medicine point of view it is obvious that women that are bleeding in pregnancy need to rest as much as possible. It may not be necessary to have bed rest but it is important for the women to arrange her life so as to have as much physical rest as possible.

Dietary advice can also play an important role. This cannot be general advice but is dependant on the specific disharmony that the women is presenting with. We can address this during your consultation and give you advice.

At Natural Solutions Acupuncture we also use acupuncture to support women that are bleeding in early pregnancy. At your first consultation we take a lot of care in determining the disharmony in your body from a Chinese medicine point of view. We then use very fine sterile needles and insert them into specific points with the view to restore the balance in your body.

How can I book an appointment?

You can book your appointment online here. In case you have any question you can email us or give us a call on 0414 067 874.